You are here: Home / Ever had a Russian Tortoise? 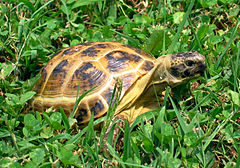 The other day I was surfing online which somehow brought me to the Wikipedia article on Russian Tortoises.  It brought back memories of the 1990s in Seattle.  As a student at the UDub, I actually owned 3 Russian Tortoises.  I think I bought my first two in 1993 if I remember right.  I had a UV lamp and made a small pen for my two tortoises I named Gorby and Tatiana.  An older Russian tortoise, Katya, joined the duo later.

Russian tortoises are quite easy to take care of.  I just fed them bok choy and romaine lettuce everyday.  During long weekend trips, I could leave them in my pen with a head of romaine lettuce.  For longer trips, my gymastic’s coach and his girlfriend would take care of them.

These guys are fun.  I let them roam my room when I am home.  You will be amazed at how much water their bladder can hold.  If they are scared, they can soak an entire pant leg which has happened to me on one occasion.  Most of the day they just soak under the UV lamp.  At nights, I would turn the UV lamp off at which point my tortoises would start to burrow underneath my wood chip bedding.  Since they were in my room, it would be annoying to hear their feet scraping on the wood floor of their pen but I think I got used to it.

Sadly in 1996, I had to sell them back to the pet store owner who sold them to me 3 years earlier.  I moved into an apartment complex that did not allow pets of any kind including fish.  I lost contact of my gymnastic’s coach so I had to let Gorby, Tatiana and Katya go.  Yeah, I do miss them.

Ironically, in the summer of 1998 which I was serving as a Peace Corps Volunteer in Karatau, Kazakhstan, some Kazakh students brought a couple Russian tortoises to me.  It turns out that in the Karatau area, there are many wild Russian tortoises.

In Vietnam, though, I have not seen any.  They are not as popular as the turtle.