You are here: Home / The AK Party

I visited Istanbul, Turkey, back in December, 1999, for the first time on a flyover from Bishkek, Kyrgyzstan, to the US. I immediately fell in love with the city. During my stay at Indiana University in Bloomington, I met Bilal Erdogan, the son of current Turkish Prime Minister’s (Recep Tayyib Erdogan) and was quite impressed at the intelligence of young Bilal. I met Prime Minister Erdogan at Indiana University many months before he became the Prime Minister of Turkey. The whole Erdogan family are to be greatly respected for their compassion and love of their religion, Islam, and the Turkish people.

I visited Turkey for 3 weeks in December, 2001. Later the following summer, I lived in Turkey for 3 months. Several of my Turkish friends were supporters of the AK Party, the current ruling party of Turkey. Yeah, the were devout Muslims but no where near the fanatics that many secular Turks want to claim AK members to be. Abdullah Gul would make a great President for Turkey. The AK Party has done an amazing job during their reign. I hope the military can use some restraint and let democracy continue to take hold in Turkey. 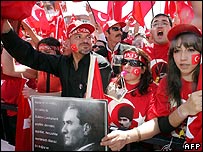 Turkey’s disputed election of a new president – pitting secularists against the ruling Islamist-rooted AK party – has gone to the constitutional court.